Architecture in Cuba- a historical compass…

Facebook
Twitter
LinkedIn
Traveling to Havana, Cuba is like traveling back in time: the weathered buildings, the old classic cars and the rich history standing out as top lures. What is less known is that at the advent of the 20th century – Havana was opulently rich, similar to Newport, Rhode Island’s gilded era. It enjoyed an extraordinary boom enriching its cityscape with international influences such as art nouveau, art deco and eclectic styles.
To this day, Havana is one of the most architecturally diverse cities in the world, and a Daguerreotype’s paradise. Its buildings are living memorials of its social and political history since the Spanish colonial times.
Ever since Columbus stumbled upon its shores to when it was formally established by the Spaniards in 1519, Havana’s importance grew as it sits nestled in a natural harbor with low hills rising gently from the sea to the height of its colonial fortifications. So take the leap and step back in time, there’s a fascinating aesthetic journey waiting. Whether it’s discovering Old Havana or the eclectic styles of the modernist era, Havana’s architectural diversity won’t disappoint!
Carnage and beauty, drama and glory, certain death for some and blessed survival for most––this is what I had come so far to see. In the end, I realize that the majesty and mystery of Africa are impossible to convey in prose. Most fall under its spell––a raw, overwhelming and unforgettable experience that touches the soul. 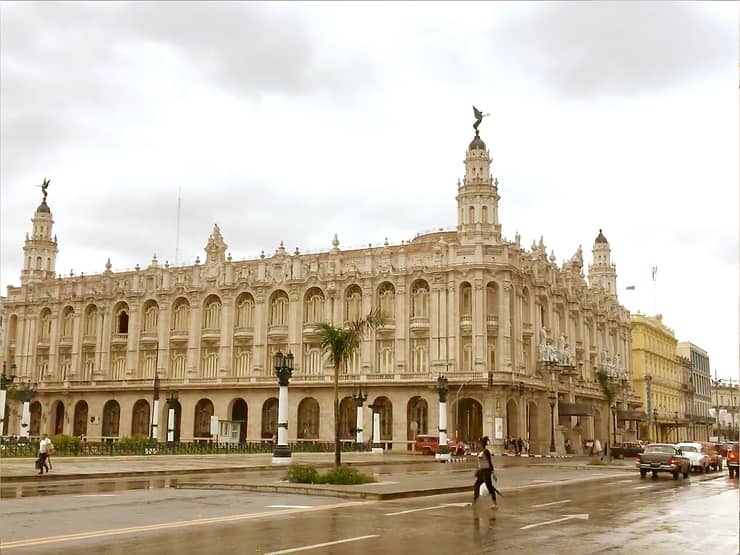 The impact of different cultures is evident in the potpourri that is Havana’s architecture, with strong Moorish influences plus Italian, Greek and Roman styles. Recurrent arcades, numerous interior patios reminiscent of design in Seville, Cadiz and Granada are now home to pulsating cafes and dance saloons.

The beginning of the 19thcentury witnessed the retreat of Spanish influence. The French filled the vacuum – refugees from neighboring Haiti exerted influence on new construction. Like the rest of the world the revival of Greek and Roman influences of stark and simpler architecture – a revolt from the ornate baroque influences, delayed the arrival of neoclassical influences.
Now dilapidated, yet magnificent neo classic buildings are resplendent with wide balconies, omnipresent arches and of course crowned columns. Havana, the “City of Columns’ is part of their legacy.

Havana, the “City of Columns’

The Aldama Palace (1844) considered the most important neoclassical property in Cuba, boldly showcases the style of this period with columns guarding spacious courtyards and French inspired lavish interiors.

Neoclassicism’s zenith came with the construction of the Vedado district (1859), a neighborhood rich with notable buildings and a mecca for nightlife and glitzy hotels. One can’t help but mull over the wealth of long gone residents. Sadly, many structures today are boarded up in utter disrepair, patiently awaiting favorable winds of change.

In the early 20th century, Havana expanded even more rapidly than at any other time throughout its history. Havana attracted merchant ships desiring to trade with the New World and Latin America. Havana became, along with Buenos Aires’ the finest city in Latin America. This prompted Havana’s architecture to be infused with a burst of art nouveau, art deco and eclectic styles. They filled the cityscape palette with pastel colors and 1960 automobiles serenading the Art Deco style from the New World.

The Yankees crash the party

Wealthy districts like Miramar, planned along the lines of the American street grid pattern, sprouted into existence, and became the sought after locales for the diplomat corps and elite Cubans. Prado Boulevard, Havana’s 5th Avenue, with banking centric sections around Obispo and O’Reilly Streets earned the nickname of “Little Wall Street.” Opulent hotels and casinos were not far behind.

America’s skyscraper boom was felt here too – the Lopez Serrano Building (1932), was inspired by none other than the Rockefeller Centre in New York, while The Edificio Bacardi (1930) around the corner from Floridita, Hemingway’s favorite hangout, is about the best example of Art Deco.

Sadly, the centuries old architecture boom came to a skidding halt with the Revolution. Drab, socialist style buildings mar the landscape. The bright side is that they are easy to ignore.

For aficionados and layman alike, a journey through Havana is a history lesson of all things that shaped Cuba. Today, UNESCO, ensuring that future generations will revel in its glory days, protects La Habana Vieja.