Facebook
Twitter
LinkedIn
Nestled between China and Russia, Mongolia is a relatively unfamiliar country with undiscovered vistas and unexpected treasures. If you asked random people on the street, most would say they’ve never visited – or even thought of it. That’s because Mongolia is a country shrouded in mystery that has managed to stay true to its nomadic and ethnic roots and barely been involved in world affairs. 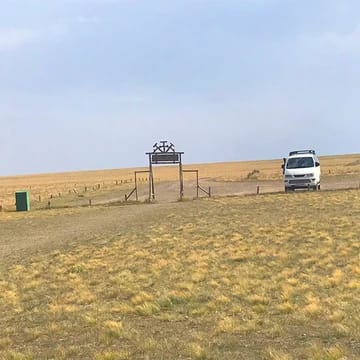 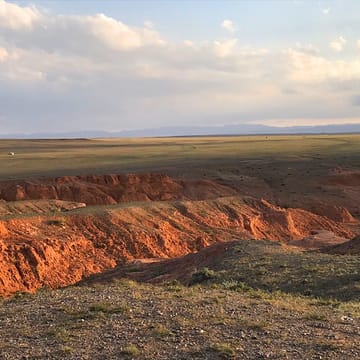 Mongolia’s strikingly beautiful and varied landscapes are just part of what makes it so unique. The fascinating nomadic culture combined with untouched wildernesses, sweeping countryside, lakes, wild rivers, and abundant wildlife making Mongolia a desirable destination for travelers who really want to get off the grid. The ancient nomadic culture is one of the last surviving of its kind in the world. It dates back to the 12th century when Genghis Khan united the country’s nomadic tribes to form the first Mongol Empire.
Visitors can experience the nomadic way of life by journeying from its majestic steppes to the remote dunes of the Gobi Desert, galloping across the wetlands on horseback, trekking over dramatic passes, and absorbing magical sunsets reflecting off the Flaming Cliffs. Tourism is a fledgling concept in the country, however it’s developing and quickly becoming one of the main stays of the country. This means now is the time to go and experience this place before it becomes ‘popular’.
Traveling to Mongolia presents a rare opportunity to leave western culture and modernity behind and embrace a special part of the world that most people will never discover. That’s why my family and I decided to take a leap of faith and journey through Mongolia, the world’s most sparsely populated country. I’m so glad we did because I can honestly say that none of us has stopped talking about our trip since!
Mongolian Culture: Rich in Hospitality
Even before we touched down in the capital city of Ulaanbaatar, my mom, dad, brother, and I were already in awe of the views we had from the plane. The desert sprawled infinitely, mountains created natural barriers around the cities, and – most impressively – there was not one skyscraper or high rise-in sight! We immediately realized that no other place on earth would compare to Mongolia.
We received a warm welcome and a delicious lunch that topped any meal we’d ever eaten on our travels. Soft and chewy naan and plenty of vegetarian options put our gastronomy concerns at ease. We realized hospitality was extremely important to Mongolians as we experienced the utmost kindness from the locals throughout our trip.
Mongolia’s most beloved monument
One of our first adventures outside the capital took us roughly 1½ hours east on a bumpy but scenic journey to the iconic Genghis Khan monument. The towering, 40-meter tall statue, perched on an impressive 10-meter tall visitor center, dominates the otherwise undeveloped area.
Climbing to the top of the statue was not an easy task given the narrow dimly lit stairwell, but the panoramic views of the sprawling steppe and rolling hills more than made up for it.The monument stands as testimony to the fierce leader who amassed the largest land mass empire in the history of mankind.

On the way back to Ulaanbaatar, we were admiring the homes and simple way of life of the locals in the countryside as we passed. Our driver pulled over and allowed us to take pictures with the friendly families who were thrilled to meet us and welcome us into their homes. We also got some snaps with some of the livestock like horses, yaks, and goats.
By chance, we happened to see some locals who were training their hunting eagles. We stopped to watch and soon one of the tribesmen came over and invited us to get closer.
My father, always first to volunteer, determined to attempt handling an eagle! He had to don heavy leather mittens to protect his skin against the sharp talons. With nervous anticipation, he held out his gloved arm while the handlers took the eagle’s hood off. As if on cue, the eagle soared and then swooped down majestically to the guiding beacon – the gloved hand. Dad was surprised by the weight of the bird (at least 4 kgs.) as the raw strength of the bird pulsed through. He had to work to keep his arm parallel and steady. The eagle meanwhile was calm but its cold darting stare was enough to remind him about the force it was capable of. It was a thrilling experience to be so close & personal with the lord of the Mongolian skies.
The Gobi Desert
A desert adventure that strays well off the beaten path requires booking a tour with an experienced and competent local outfitter. Upon arrival, a rugged SUV was waiting for us, with an experienced driver who possibly knew every dune and ridge of Asia’s second largest desert. He drove us two hours into the unknown, separating us from the few other travellers almost instantly. We silently absorbed the other-worldly landscape around us. It felt like we had stepped into a different dimension or landed on Mars! The orange rocky ground stretched in every direction, pausing to meet the horizon at the most impossibly blue sky we’d ever seen. This is when we understood how Mongolia earned its nickname, “Land of the Eternal Blue Sky.”

We arrived at our Gers, a traditional Mongolian hut made from animal skin. Typically, they are very basic, but ours came with some wordily trappings like en suite baths, soft bedding, and a sealed roof. The locals cooked a delicious meal for us and I could hardly believe it was possible to concoct something vegetarian that was so tasty in the middle of the Gobi Desert!
Spending a night under the stars
We spent a peaceful night under the stars, gazing up at a jet-black sky punctuated by millions of twinkling lights. It made us feel like we were the only people on the entire planet. We woke early to catch the sunrise – it was as if we were sitting on another planet as we watched the sun split the horizon and spread its beams of light over the endless moon-like landscape.
What could be better that this? Experiencing it all without any other tourists. We were so fortunate; we had the entire Ger Camp to ourselves.

The cherry on top of our Gobi Desert experience was riding two-humped camels over the dunes. What an amazing, once-in-a-lifetime thing to do. And – surprisingly – a lot more comfortable than we were expecting, thanks to the camels’ second hump acting as a supportive backrest! Or so we thought. The experience after disembarking was another story – the grounds appeared to be a bouncing beneath our feet and our thighs and back were stretched and they ached with every step!
*Expert tip: try to select a camel that has a plush pillow on top of it’s saddle. My brother had a less cushion-y seat than the rest of us and he certainly felt the physical pains after that (and had a bruise to prove it!)
Hustai National Park
After the desert, we made our way back through the Ulaanbaatar and continued 100 kilometers west to Mongolia’s best-managed protected areas, Hustai (also known as Khustain Nuruu) National Park.
We chose to end our trip with this park for several reasons. First, my dad (the family history-buff) has always been inspired by Genghis Khaan, founder of the Mongol Empire and one of its greatest rulers. His hero had once galloped along the grassland of the current-day National Park on horseback and my dad longed for the same experience. Not only did we horseback ride through the vast grasslands, we also spotted a herd of wild Przewalski horses, one of the park’s most iconic sites. To me, this image of complete and utter freedom will remain imprinted in my mind.
************************************************
Mongolia was not what we expected. It was much, much more. The local culture and hospitality massively exceeded our expectations, the landscape literally took our breath away, and the Gobi Desert blew our minds. Our trip to Mongolia completely changed my perspective on traveling, inspiring me to get off the beaten path and discover places lesser known.